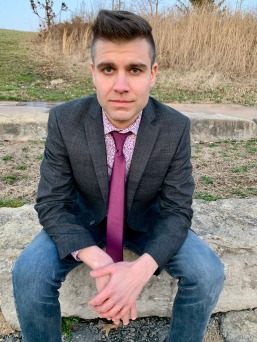 Dr. Alexandros Fragiskatos is a percussionist, educator, and arranger based in central Missouri. Currently, he teaches percussion at Central Methodist University. Having developed a passion for contemporary music while studying with the renowned Percussion Group Cincinnati during his undergraduate years, Alex has commissioned and premiered new works in a variety of settings by composers such as Stuart Saunders Smith, Peter Garland, and Tom DeLio. His diverse musical training has led him to performances across Europe, including a 2018 televised solo percussion recital in Athens, Greece and a 2016 tour of Switzerland with the Arizona Contemporary Music Ensemble, collaborating with, and performing new works by, several Swiss and German composers. In the U.S, he has performed at The Noble Snare 25th Anniversary Festival in Akron, Ohio and the Southwest Electronic Music Festival in Phoenix, Arizona in 2017 and the Percussive Arts Society International Conference in Indianapolis, Indiana in 2013. As an orchestral musician, he has performed with the Akron Symphony Orchestra, Missouri Symphony, Richmond Symphony Orchestra, Tuscarawas Philharmonic, and the West Valley Symphony. Alex also has extensive experience playing drumset and percussion for musical theater productions.

Alex has been playing steel pan (steel drum) for over fifteen years. As a member of the Grammy-nominated steel band at The University of Akron, he developed a deep appreciation for the instrument and its cultural importance within its birthplace, Trinidad and Tobago. Alex has studied, collaborated, and performed with virtuosos in the field like Cliff Alexis, Ray Holman, Liam Teague, Tom Miller, and Victor Provost. Many of Alex’s steel band arrangements are published and have been performed across the U.S. and internationally. He has been invited to serve as guest artist and lecturer at several institutions including Pacific Lutheran University, the University of Missouri, and Phoenix College. In 2018, he gave a steel pan masterclass and performance in Athens, Greece. Alex’s accomplishments in steel pan have been recognized in ASU’s State Press and by the U.S.-based Steel Pan Collective, in the form of a feature profile.

In the past, Alex has taught at Missouri Valley College, Grand Canyon University, and for the Maricopa Community College District in Phoenix, Arizona. Alex holds a bachelor’s and master’s degree in music performance from the University of Cincinnati’s College-Conservatory of Music and the University of Akron, respectively. He earned his Doctor of Musical Arts degree from Arizona State University, where he also obtained a Music Theory Pedagogy certificate.

Alex is a proud endorser of Black Swamp Percussion.